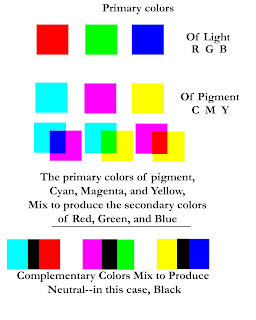 The behavior of color is often quite misunderstood, even by artists. They often try to categorize the behavior of colors into two (or more) separate "theories" or ways of behaving, when, in fact, color truly behaves much as gravity does, in that it follows a logical and understandable set of "rules" in its behavior--and, that there is only one set of "rules" by which color behaves, rather than two or three. Also, those rules remain the same, when moving from one art medium to another. One does not have to "re-learn color theory" when moving from oils to watercolors, for example.

An interested artist can make very good use of a sound knowledge of color behavior in his/her everyday mixing and using of colors. This can speed up the mixing process by reducing the amount of guesswork.

One of the first things to understand is that it is because of the inability of our eye to detect the separate, different color wavelengths in a color mixture when viewing it, that allow us to see the many colors that we witness in our everyday lives. Unlike the human ear, that has the ability to detect the different wavelengths of sound, in a harmony, the eye cannot make this distinction, and, instead, when viewing a mixture of wavelengths of color, actually sees another, often totally different color. The other thing to keep in mind is that there are only three colors of light in this entire universe--Red, Green, and Blue.

Understanding color behavior is no more complicated than being capable of memorizing a 10-digit telephone number, and being able to subtract either "1" or "2" from a total of "3".

The basis of all color behavior is the white light spectrum. Although there appears as though there are dozens of actual "hues" in the spectrum (or "rainbow"), for all practical purposes, all those wavelengths of light colors that comprise white light can be combined into three primary colors of light--Red, Green, and Blue. Those are the only colors that are required to produce all the colors we see in real life.

At the top of this post is a color display that exhibits that which I am describing. With a 10- or 20-power loupe, or magnifier, closely examine the white area surrounding each of the primary colors of light--Red, Green, and Blue. You will notice that Red, Green, and Blue are represented equally. When you examine each of the primary colors of light, you will notice that while one will be illuminated, the other two will be black. Black represents the absence, or absorption of light, and in this case, the absorption of the other two colors of the white light spectrum.
When you examine each of the three primary colors of PIGMENT, Cyan, Magenta, and Yellow, you will notice that each one actually reflects TWO of the Red, Green, Blue colors of the white light spectrum. These are the primary colors of pigment, and absolutely NO other colors around the color wheel exhibit that particular characteristic. That is why the primary colors are unique, and also why they cannot be created by mixing any other pigments together. It is best not to take too seriously those who claim that there are no primary colors, or that one can select any color one chooses as a "primary" color. You will quickly learn that is not a valid belief.
Cyan reflects both Green and Blue light, while it absorbs the Red third. You can see that with your loupe, as you examine the Cyan patch.
Magenta reflects both Red and Blue light, while it absorbs the Green third. Again, examine the Magenta patch to see that. See the black stripe? That represents the absorption of Green.
Yellow is the most interesting of the three primary colors of pigment. It reflects both Red and Green light, while absorbing the Blue third. You will see no actual "Yellow" in the color, at all.
It has been estimated that only approximately 7 % of the color, Yellow, that we see in everyday subjects, is truly "spectral Yellow," but is, instead, equal reflectances of both Red and Green light. The color, Yellow, is always represented by equal reflectances of Red and Green light, whether it comes from a banana, a yellow Corvette, a daisy, or a patch of yellow on your computer monitor. There is no diffence, whatsoever. It is pure, scientific logic.
When we mix Cyan (which absorbs the Red third of the white light spectrum) with Yellow (which absorbs the Blue third of the white light spectrum), we produce by the simple logic that the only color left visible is the Green portion of the white light spectrum. Green is a secondary color, created by the mixture of Cyan and Yellow.
When we mix Magenta (which absorbs the Green third) with Cyan (which absorbs the Red third), we create the secondary color, Blue. Why? Because in that mixed combination the only color left to be seen is Blue. Blue is the secondary color created by the mixture of Cyan and Magenta.
When we mix Yellow (which absorbs the Blue third) with Magenta (which absorbs the Green third), we produce the secondary color, Red.
Complementary colors are those that are directly across from each other on a true color wheel, and when mixed, produce neutral. Now, see if you can use that mathematical logic to prove to yourself that complementary colors mix to create Black, or neutral. I'll give you a start: When you mix Yellow (which subtracts the Blue third) with Blue (which subtracts both the Red and Green thirds), the results are NO COLORS OF LIGHT..nothing, zero. And, the absence of all light is, indeed, what color?__________.
Now, use the same logic to determine why Cyan and Red are complements, and Magenta and Green behave as complements.
Isn't that simple? Why don't more art instructors teach this simple logic, instead of recommending all those trial-and-error mixing charts?
Bill
Posted by Bill at 9:51 AM 2 comments: This is my version of the well-known rock formation that is on the Utah/Arizona border, and
can be accessed by a boat trip on Lake Powell. I created this painting from a composite
photo of those that I had taken of the area, when I was there. The actual water did not
appear as clear, or as deep as it does in this painting, but I simply took some
artistic license with it, to make it more appealing.
"Rainbow Bridge"
SOLD
Posted by Bill at 9:23 AM No comments: 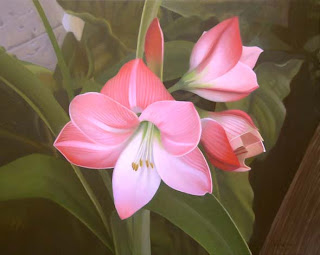 I took a snapshot of an Amaryllis in our backyard flower patch, and thought I'd paint it. That idea worked very well, because I sold the painting right after I painted it. I titled it, "Amaryllis By Morning. It is a 16" x 20" oil on canvas.
SOLD
Posted by Bill at 10:06 PM No comments: 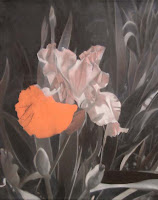 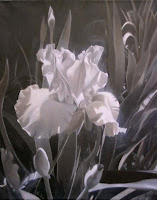 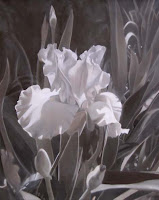 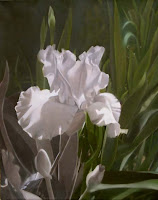 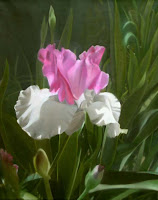 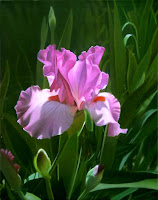 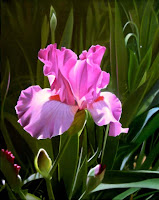 I use a glazing technique to create the works of art that are represented here. While some may feel that it is a complicated, time-consuming method, wrapped in mystical, mysterious methods, I have found that such is not the case, at all. Above are several step-by-step work-ups, exhibiting the stages through which nearly every one of my pieces progresses, on its way to a finished work of art. You will notice that the early stages of my process are located at the top of this group of work-up photos. The orangey-brown appearance in the first two stages is the Sienna-colored imprimatura (oil paint layer) showing through.
Posted by Bill at 2:17 PM 3 comments: 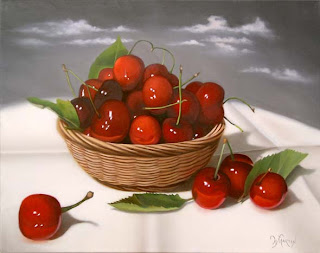 You've heard the phrase, "Life is just a bowl of cherries?" Well, that is what was running through my mind, as I painted this piece.
SOLD
Posted by Bill at 1:12 PM No comments: 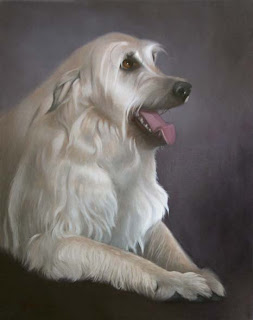 I really enjoy painting animals. I painted this by commission, and it is a 16" x 20" oil on canvas, of an Irish Wolfhound, named Brannigan. He is a very mild-tempered dog, although he is the size of a small horse.
SOLD
Posted by Bill at 12:07 PM 1 comment: 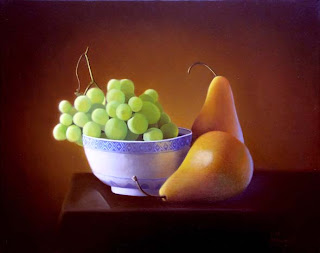 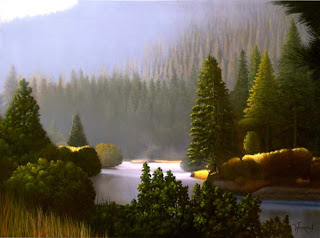 This painting creates a feeling of the morning mist that permeates the air in the piney forest. I've titled this painting, "Morning Mist." It is an 18" x 24" oil on canvas.
FOR SALE
Posted by Bill at 8:41 AM No comments: 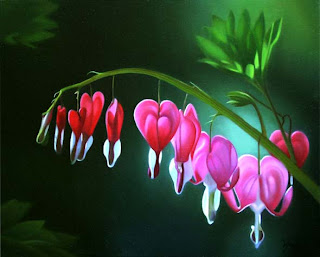 This is a nice oil of a flower that is quite prevalent in the midwest, called a "Bleeding Heart." This is a 16" x 20" oil that I've titled, "Hearts Afire".
FOR SALE
Posted by Bill at 11:05 PM No comments: 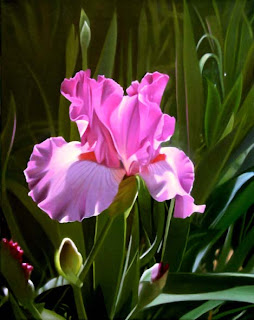