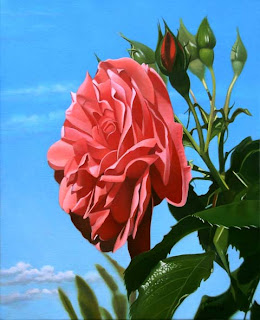 "Misty Rose" is an oil painting that I created on linen canvas. Linen has the reputation of having a bit more longevity than cotton canvas. I made use of Old Holland's Manganese Blue Deep for the sky portion of the background. It is claimed to be a multiple-pigment color, but I've never given that much consideration, as long as the color is what I want.

This painting received the "Merchant's Award" at an art show held at the Peoria School District Main Office, 2010. It also received an "Honorable Mention" at the Peoria Celebration Of Artists" competition in March 2011.
Posted by Bill at 7:34 PM 7 comments: 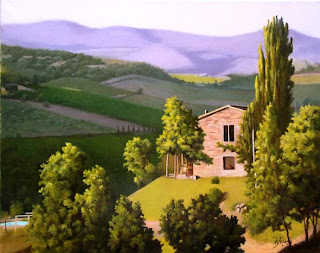 This is another painting that I used as a demonstration for my students taking the oil painting class that I teach. This is 16" x 20," oil on canvas. I use a very limited palette for these demonstration pieces. This is to keep the purchase of oil paint very affordable for my students. I use Grumbacher Pretested Oils and place the following colors on my palette: