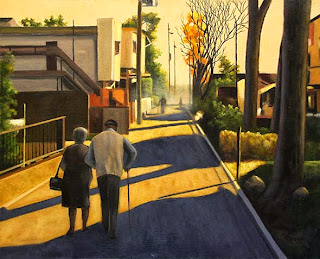 Painting a bit outside my "comfort zone" once again, I created this painting from the lyrics of an Irish
song, "Raglan Road".  This a 16" x 20" oil on Raymar Canvas Panel, titled, "Where Old Ghosts Meet".

It received a 2nd place in our PFAA art club's fall show.   SOLD

On a quiet street, where old ghosts meet,
I see her walking now,
Away from me so hurriedly,
My reason must allow

That I have loved not, as I should,
A creature made of clay.
When the angel woos the clay, he'll lose
His wings at the dawn of the day.
Posted by Bill at 11:36 AM 2 comments:

I am entering this painting in an annual, Fall art competition that our PFAA art club hosts each year.  This is a 16" x 20" oil on canvas, that I have titled, "Rose Buddies". 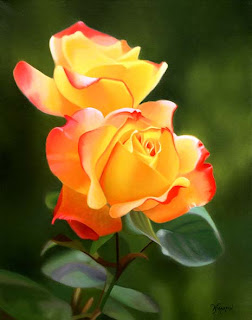 Is anyone familiar with the term, "Bokeh"?  It comes into play very well in this painting, I think.
Posted by Bill at 3:49 PM 8 comments:

I just finished varnishing this painting, and I plan to enter into the Arizona State Fair, this year.  It is a 16" x 20" oil on RayMar, Canvas Panel.  I'm calling it, "Simba". 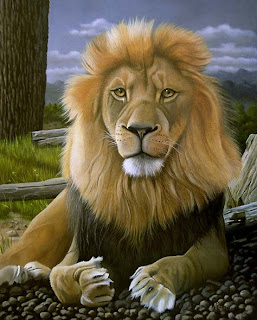 "Simba" received an Honorable Mention at the Arizona State Fair, 2013
Posted by Bill at 9:38 PM No comments: 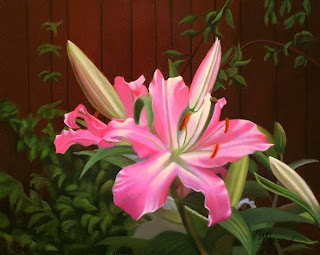 This is a little, 8" x 10" oil painting that I created on a hardboard panel.  I call it, "Petal Pusher", and I may enter it into a local art competition.

DaVinci Didn't Paint With PLASTIC, and Neither Do I

I have followed the tenets of the old masters in terms of my oil painting mediums, primarily because it seems to me that if their paintings can survive for centuries, I’d like mine to survive that long, as well.
I use traditional materials in my painting mediums, which I mix myself, from a recipe that I invented, based upon logical information I have gathered over the years, from other artists who enjoy the benefits of traditional materials.

Today, there seems to be some sort of attraction for the use of the more “modern” painting mediums, such as the alkyds.  Alkyds, while not truly being "plastic", are synthetic (rather than natural) resins, whose beginnings sprang from their use in the painting of industrial machinery, bridges, park benches, and the like.  They were never engineered for the creation of fine art.  It was only through insidious, and cunning marketing that they ever gained recognition in the field of fine art.

When the manufacturers of this stuff decided that they could package it in attractive, designer containers, and sell relatively small quantities of it for three or four times its industrial value, the focus of the manufacturers then became that of trying to convince fine art oil painters that this stuff was somehow advantageous for them to use, compared to the time-tested, traditional medium of the old masters.  Their ploy seems to be to convince oil painters that these materials have been engineered to solve some sort of problem that truly never existed in the first place.

The popularity of these alkyds seems to be centered, primarily, around materials such as Liquin, by Winsor & Newton, and Galkyd, by Gamblin.  These are both examples of alkyd mediums.  I truly question their compatibility with traditional oil paint.  Liquin becomes gummy, draggy, and tacks up quickly on the palette while you are working with it, but doesn’t seem to really be all that “fast-drying” once it hits the canvas, where it usually remains tacky and sticky for days after it has been applied.  It is cloudy because of a clay ingredient, known as Kaolin—the same stuff that is in the anti-diarrhea medicine, Kaopectate.  Why any oil painter would prefer a cloudy oil painting medium is beyond my comprehension.  It does not keep well, and after a few weeks or months will turn brown and become hardened in its own bottle.  It smells like kerosene.

Delamination of layers of paint containing alkyd mediums has been reported, which seems to be caused by the fact that alkyd mediums dry fast, like a “lean medium”, yet remain flexible, like a “fat medium”.  This makes it nearly impossible to predict with any degree of certainty, just where they should be placed in an oil painting, containing layers of more traditional drying oils, resins, and solvents.

Most of  these alkyd mediums set up on the palette much too fast to be able to do any effective glazing or layering, and they all pretty much smell like petroleum products—gasoline, kerosene, and the like.  If it is a fast-drying medium that is the attraction, I can offer several recipes of traditional ingredients that will easily fill that requirement.

One artist whom I know once referred to Liquin as “Satan’s Vomit”, and I pretty much concur.  My constant goal is to convince the beginning oil painter to avoid the use of alkyd mediums with traditional oil paint, as I have, and to intelligently mix their own layering and glazing mediums to accommodate their own painting methods.  (Linseed Oil or Walnut Oil, and a solvent are the basis of a sound, user-friendly, painting, and glazing medium.)

Even Winsor & Newton claims that they do not recommend the mixing of much Linseed Oil with their Liquin, because they claim the applied paint "may dry unevenly", or that doing so "might cause problems over time", which logically leads one to ask the question, “Then, of just what does Winsor & Newton think oil paints are made, if not Linseed Oil?”  That seems to smack directly at "incompatibility", by my simple logic.

I have ceased pleading my case for avoiding this atrocious alkyd material with traditional oil paint on the various art forums upon which I am a member, merely because there are too many painters who have been misled into the use of this plastic stuff, thinking that “modern” automatically means “better”, and they constantly refute my advice to beginners to avoid using alkyd medium.  I don’t much care, because through experience, I am in position to have seen through, and past the attraction for it, but I only desire to convince those who are new to the medium of oil paint that traditional mediums not only “work better” in terms of allowing one to apply paint in an easier fashion, but are more logical to use in terms of archival integrity, as well.

Anyone who may be interested in having my recipe for what I consider the best, most useful, traditional, glazing medium I’ve ever used, please e-mail me with your questions.
williamfmartin@cox.net
Posted by Bill at 11:00 AM 14 comments:

I ventured a bit out of my "box", as I sometimes do, and painted this subject by using a bit more painterly approach just for the fun of it.  A cityscape, as viewed on a foggy, rainy evening, by a "first-nighter". 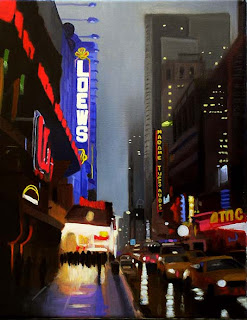 This painting just received a First Place in Painting, as well as a Best Of Show, at the Peoria Celebration of Artists, held at the West Valley Art Museum Gallery, in Peoria City Hall, Peoria, AZ.
Posted by Bill at 9:42 PM 5 comments:

This is a painting that I used as a demonstration piece for the oil painting class that I teach at a local recreation center.  It is a 16" x 20" oil on canvas painting, that I have titled, "Deep Woods Falls". 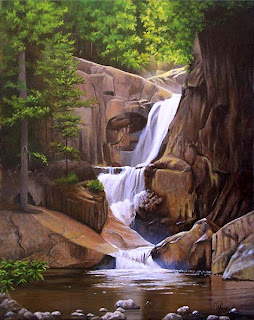 This is a 16" x 20" oil on canvas painting that I just completed.  Like my other flower paintings, I have used my glazing method in painting this one. 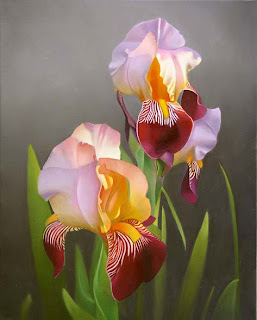 I have titled this painting, "Pearly Pair"
Posted by Bill at 3:29 PM 5 comments: